Sometimes the most fun is the unplanned kind.

A few weeks ago, a family friend let me know she had purchased tickets for the Polar Express train ride, NJ and wanted to gift them to our family since she was now unable to attend herself– yea, she’s pretty amazing.

We’ve heard a lot about the Polar Express train ride, there are two here in NJ but had never been and really weren’t sure what to expect– but we knew the kids would have a lot of fun– especially Avery who is crazy about trains these days.

What we didn’t expect is how into it our oldest would be! He’s 11 (going on 16) now, so it’s sometimes hard to get him excited about these types of things–but as soon as he heard we were going he announced: “I’m wearing my Pajamas!! We didn’t know that families are encouraged to wear their pajamas for the ride, but apparently, our son did!

So with all 3 kids in PJ’s and bundled up– we headed to ride (what Avery has dubbed) “Santa’s train”…. The station and train had a classic look and feel and everyone, and I mean EVERYONE who worked there was upbeat and in character– from the people at the will call window to the people calling groups for boarding.

When our group was called, we approached the train. The conductor welcomed us, and before we could enter,  a little boy in a deep blue robe (like in the book) quickly ran up to ride the train. The train was beautifully decorated and the sweet smell of sugar cookies and hot cocoa waft throughout.

We sang songs with the train staff and they read the Polar Express as we were served hot chocolate and cookies. The cocoa was the perfect temperature too– not too hot, but warm enough for even Avery to enjoy right away… and as if this winter wonderland experience couldn’t get any more perfect, the snow began to fall– for real! The train ride lasted about an hour and passed by Santa’s village in the North Pole where Santa boarded and stopped in to say hello and gift us “the very first Christmas gift– a silver sleigh bell”, which he explained could only be heard by those who truly believe. 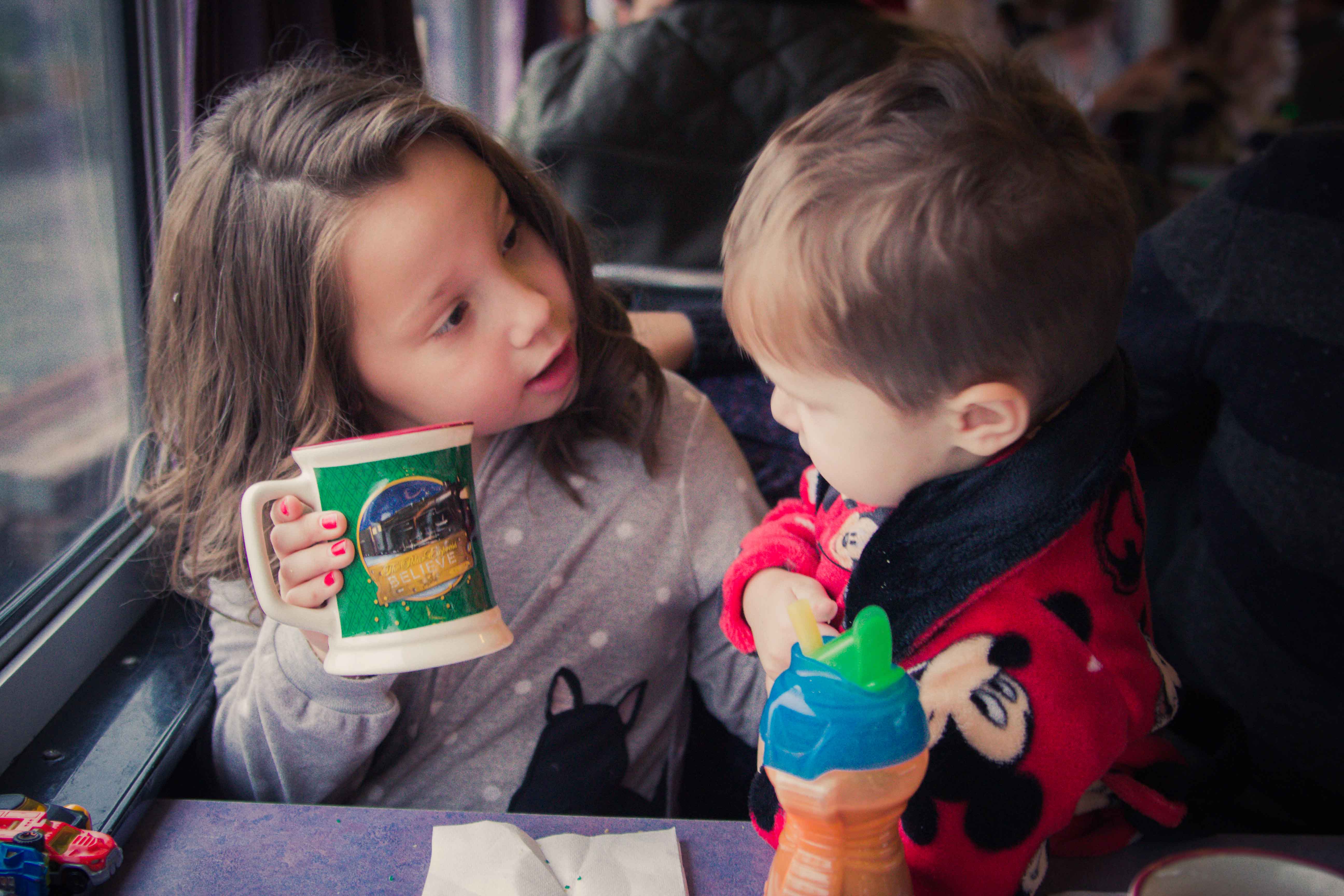 When we stepped off the train, into the snow, dreams of a snow day began dancing in the kid’s head, but sadly for them, it was not snowing back at home– *poof* magic moment over–end scene. About The Polar Express along the Morristown and Eerie Railway THE POLAR EXPRESS™ Train Ride departs from Whippany Station located at 1 Railroad Plaza, Whippany, NJ 07981. Passengers are required to arrive at least one hour before their listed departure time to allow time to park at a designated offsite lot, ride a shuttle to the station, and board the train.

The $75 tickets include a bell, table seating and ceramic souvenir mug.

There is merchandise available for purchase, but it important to note that it is CASH ONLY.